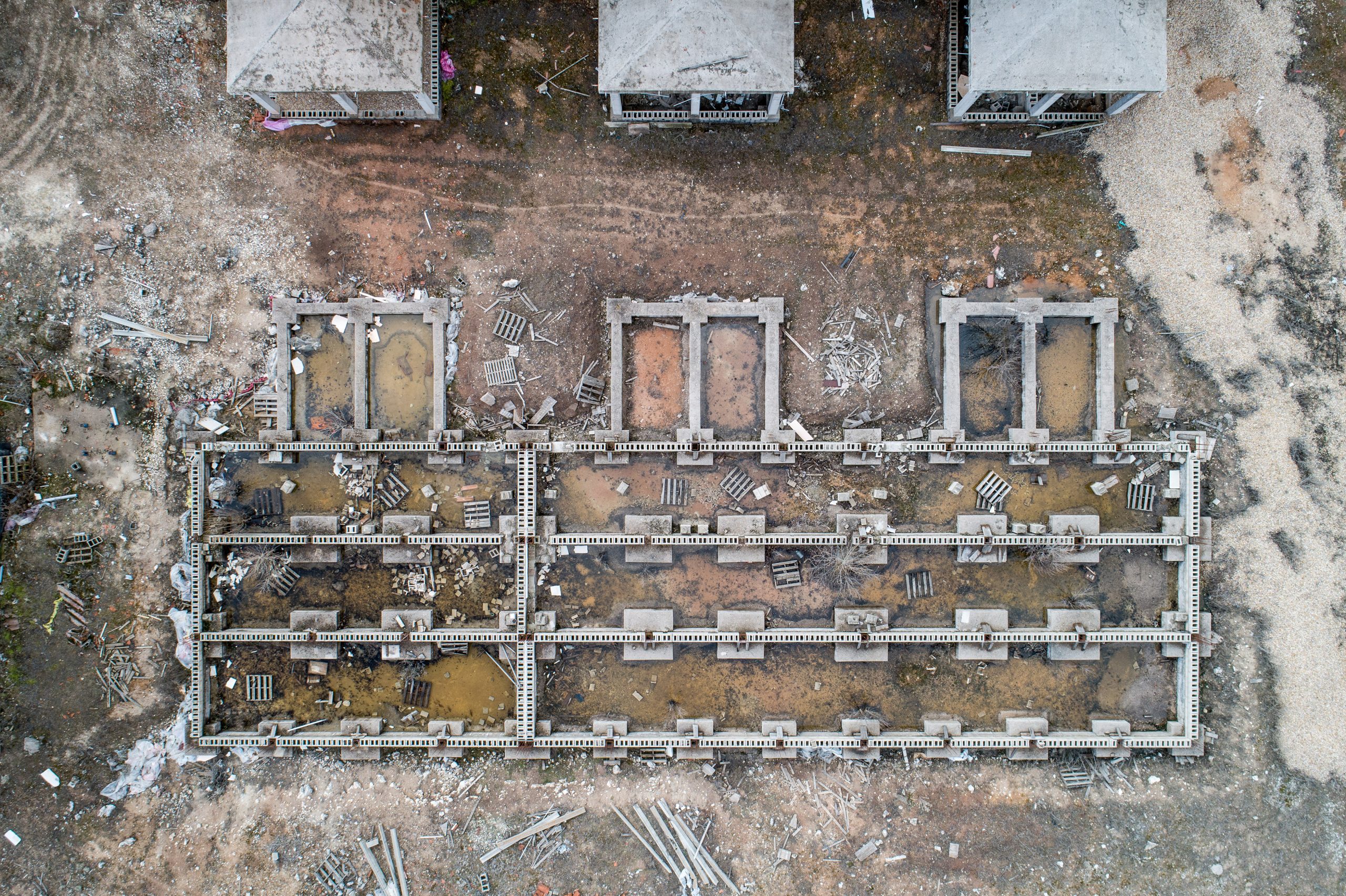 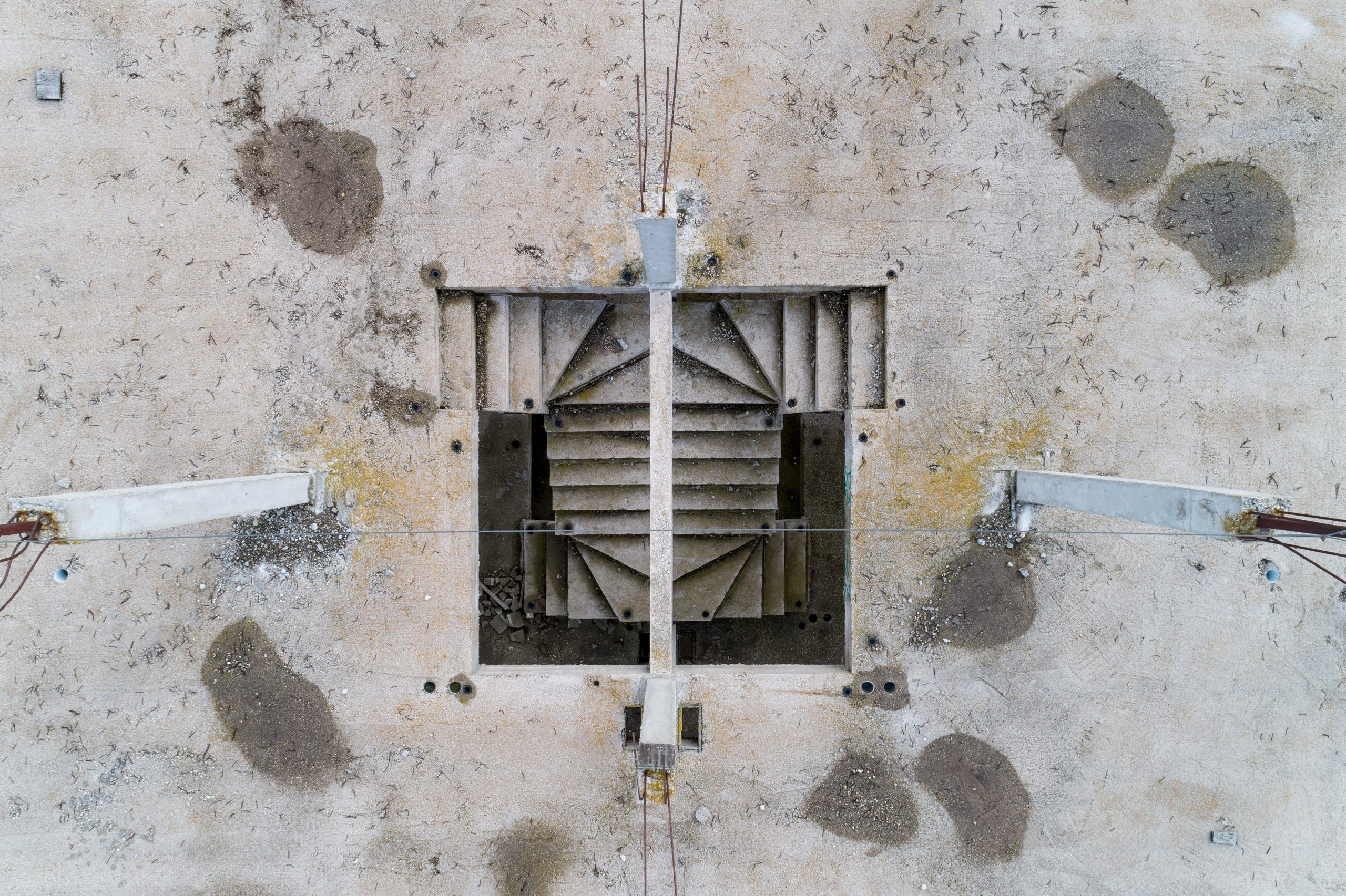 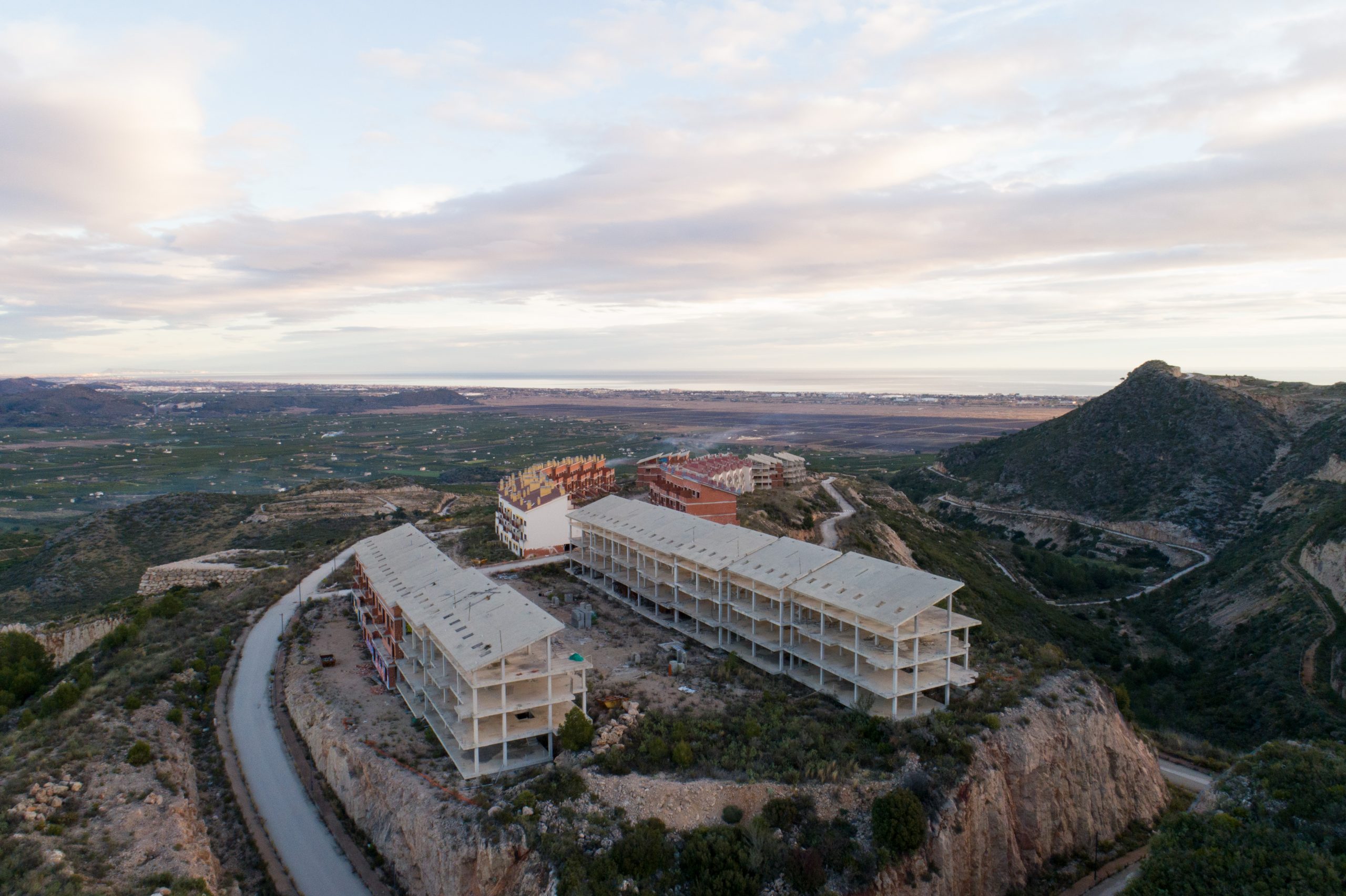 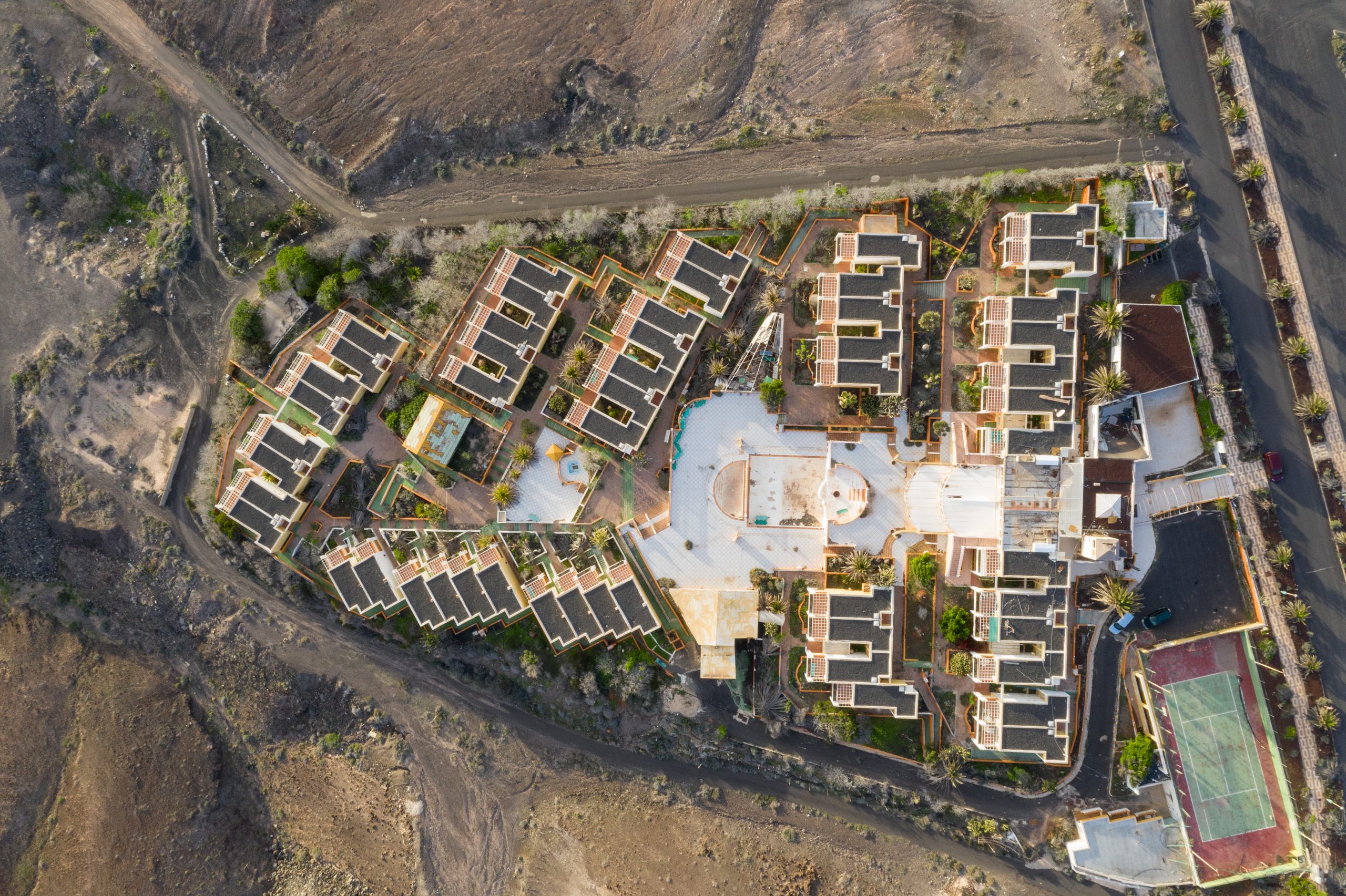 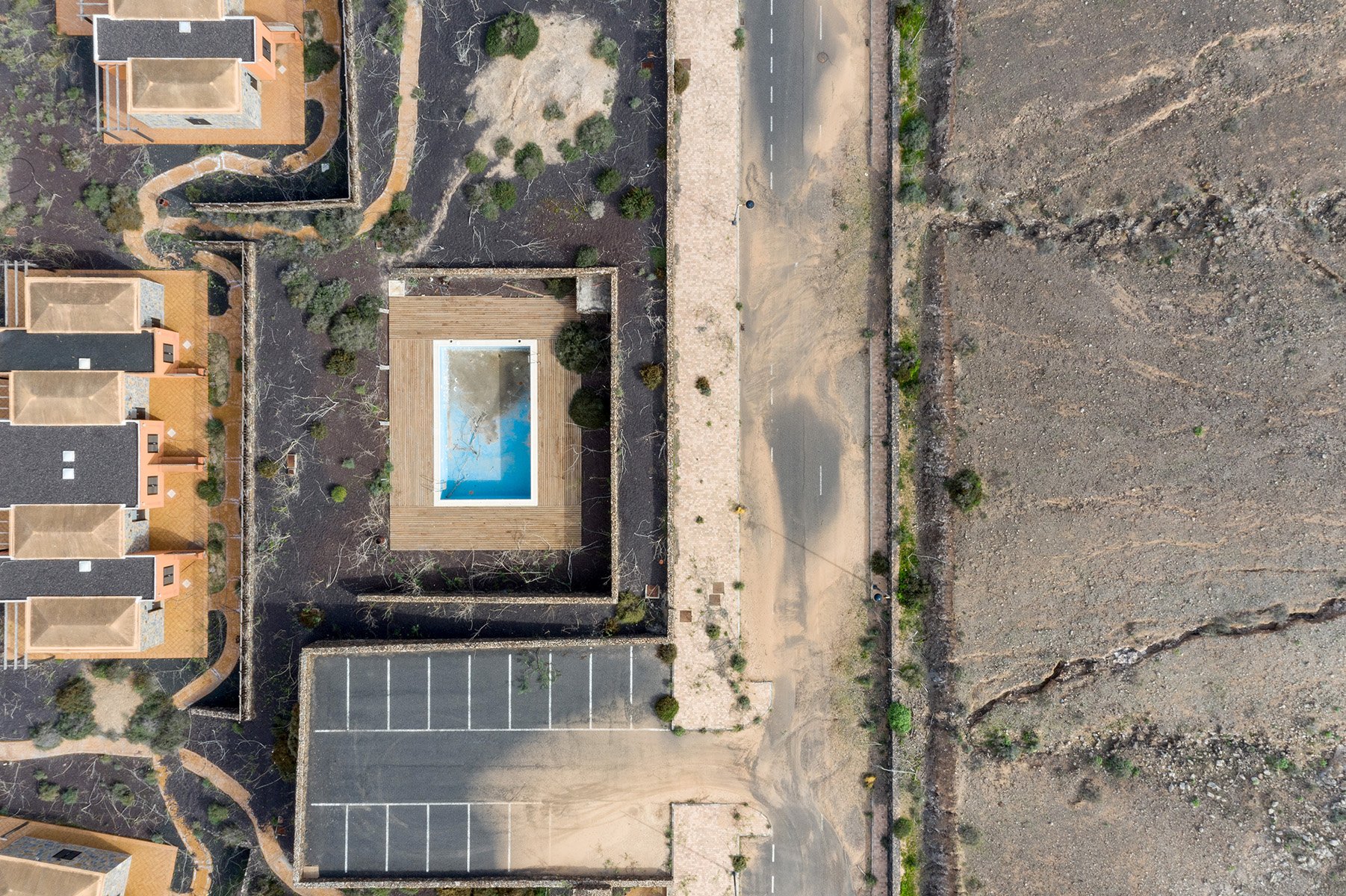 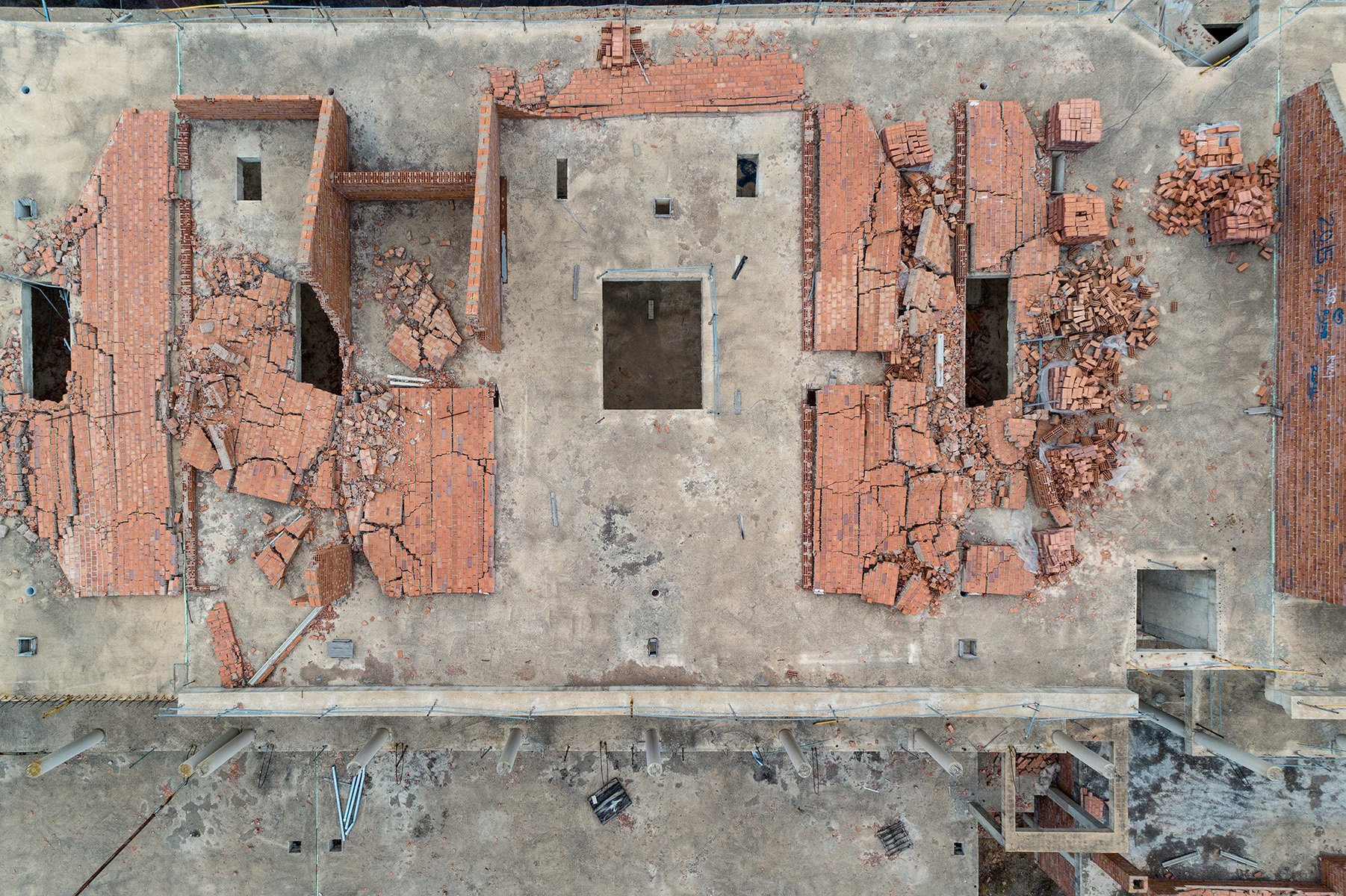 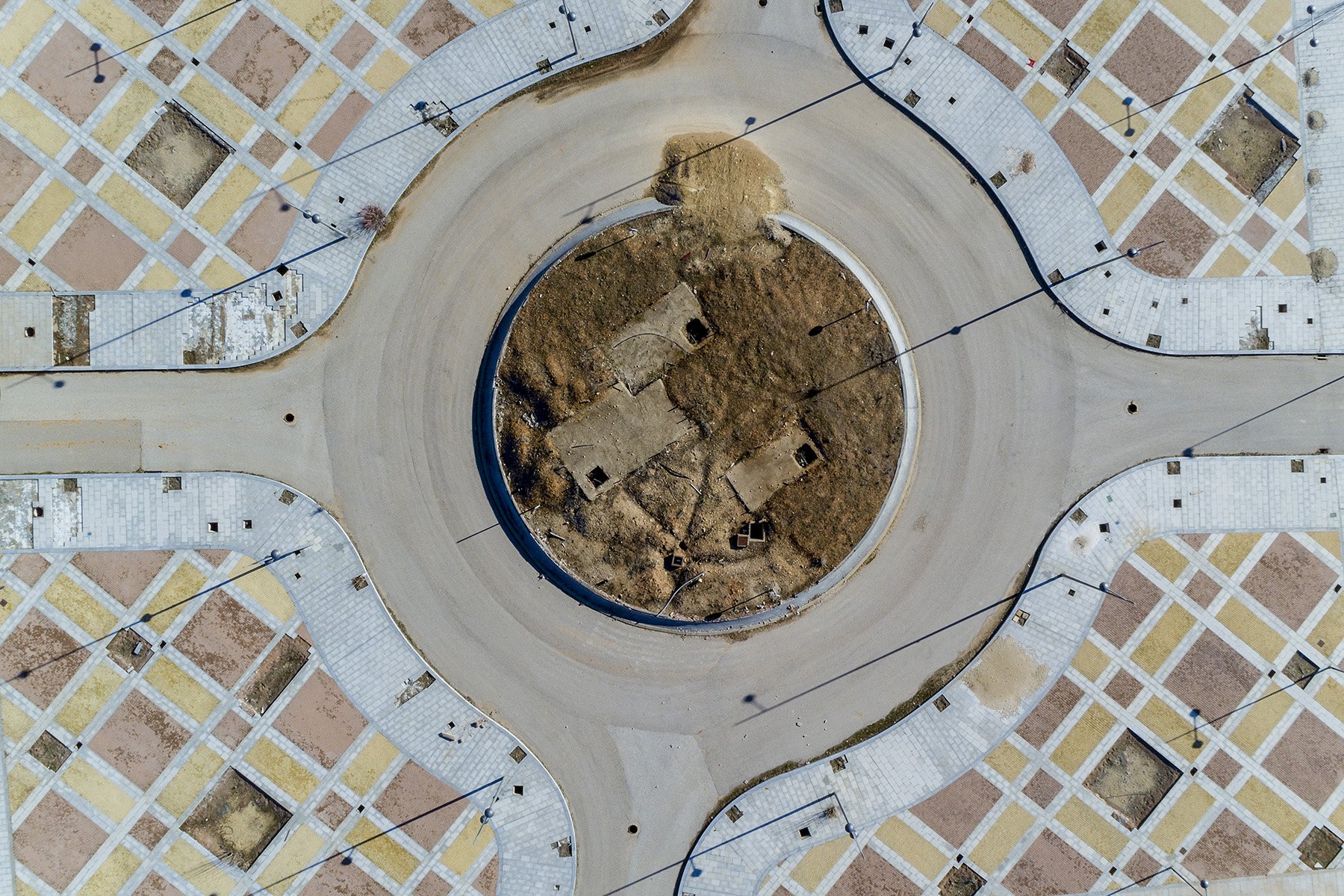 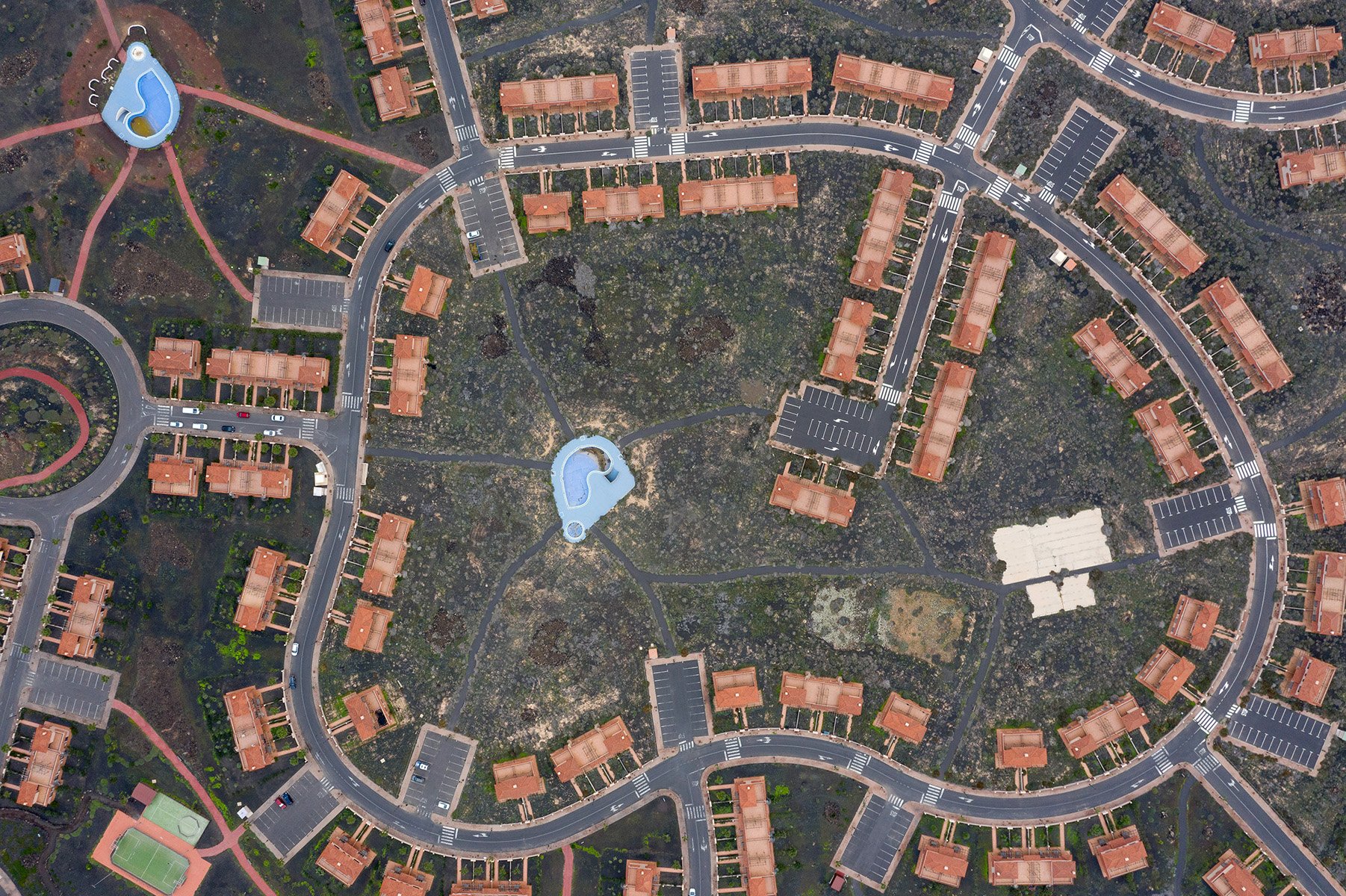 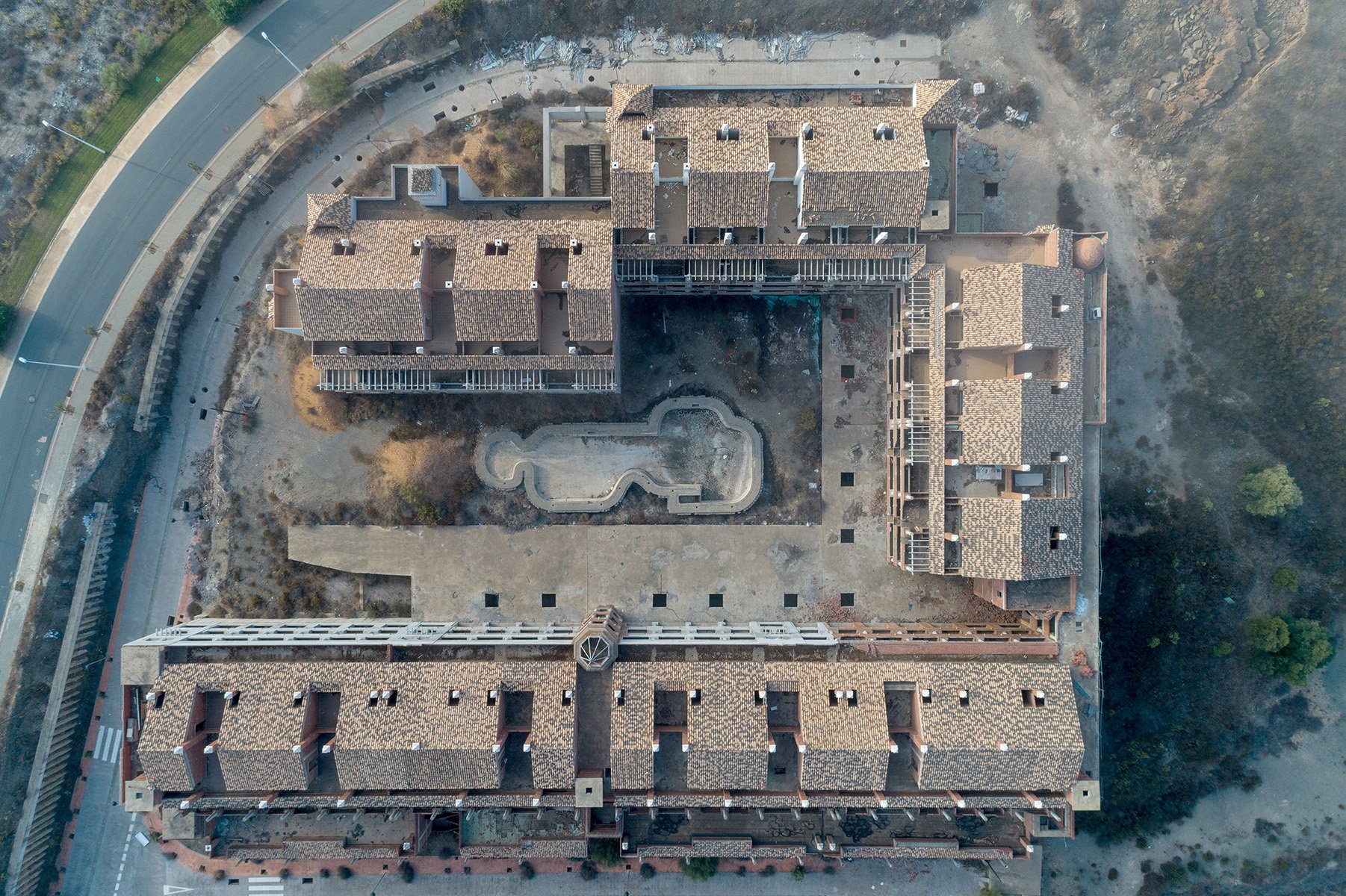 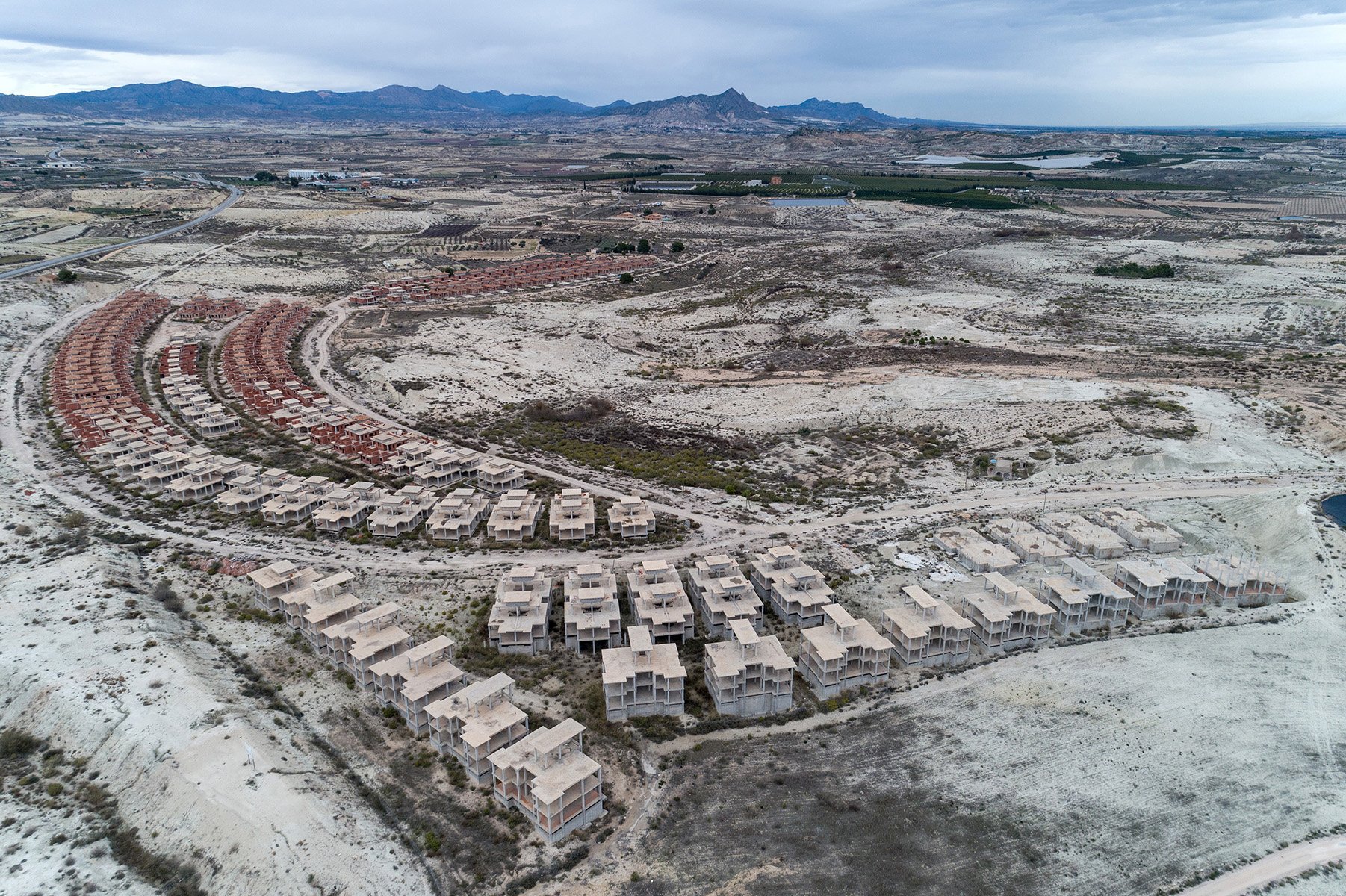 Moved by the need to capture the absurdity of the situation and to show the apathy of the authorities, Markel Redondo began to travel around Spain after the 2008 crisis to record the consequences of unbridled urbanism. Almost ten years later, he has revisited these places, including new locations, and provided new data after deciding to take photos with a drone to get aerial views. This decision, apparently simple and with technical deliberation, has resulted in images with a much deeper meaning, because they give a bird’s eye view and reveal the appearance of a new type of modern ruin.

These constructions do not contain stories, feelings or murmurs of the past but on the contrary show the skeletons of constructions where there has never been any life. They are mirages of human greed where we find neither longing nor pain, only the impression of being the last inhabitants on earth.

Spain was one of the countries hardest hit by the European economic crisis in the late 2000s, due to a toxic combination of billions of euros worth of bad loans held by Spanish banks and a real estate bubble that burst in spectacular style in 2008.

Following almost four decades of post-war dictatorial rule under General Franco, the country became a model of free-market economics in the 80s and 90s, attracting thousands of wealthy Europeans drawn by the promise of affordable second homes in the warmth of the Spanish sun. Economic growth continued in the early 2000s, based largely on cheap credit and a burgeoning real state industry pushing for intensive construction projects around major cities and coastal areas. The culture of private home ownership, fostered during good economic times, was a seemingly achievable dream for many Spaniards.

And yet, with the property market crash of 2008, many developers went bankrupt and banks sat on billions of euros of bad loans. The resulting downturn and dramatic rise in unemployment to an unprecedented 29% by April 2013 left Spain in a state of economic emergency.

Sand Castles was exhibited in Getxophoto festival in 2018. The installation was set up as a real state office (I am attaching a photo to get an idea of how it looked) with photos in a street window and and office space with more photos and a video (video footage of the project) been screened in a computer.